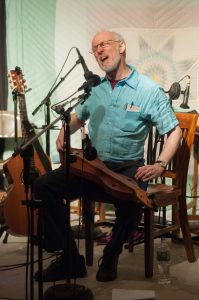 Connecticut-based Sam Edelston is on a quest to make dulcimers as popular as flutes and fiddles. His mountain dulcimer videos have been viewed hundreds of thousands of times, ranging across the rock and pop spectrum, plus bluegrass, bossa nova, opera, and more. He draws his musical inspiration from rock bands, symphony orchestras, modern a cappella, and anything else that crosses his path. On acoustic and electric dulcimer, he often makes his three strings sound like more than one instrument, and has gained a reputation as an innovative arranger.

Around age 13-14, Sam discovered pop, rock, and country radio, and also started making up songs and playing guitar. By the end of high school, he had written over 400 songs. (His major songwriting influences were Tom Lehrer, Shel Silverstein, and Dick Feller — which probably explains a lot.)

During those years, Sam also discovered the vibrant New Jersey folk music scene and a wonderful crowd called the Folk Project, and he fell in love with the sound of the hammered dulcimer.

After a decade of being the token guitarist at dulcimer festivals, he finally took up the hammered dulcimer himself. A dozen years later, he became chair of the nascent Nutmeg Dulcimer Festival, and only then did he take up mountain dulcimer.

“With his complex layered arrangements of so many genres of music for the dulcimer, Sam has added a huge chapter to the development of the mountain dulcimer as a versatile and ever growing musical American folk instrument.” — Dulcimer legend Joellen Lapidus, writing at Folkworks.org