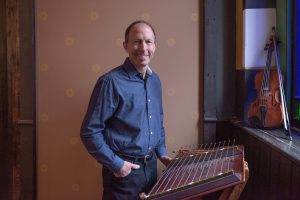 After decades of touring as a soloist and in various ensembles (Helicon with Chris Norman and Robin Bullock, Greenfire with Laura Risk, Elke Baker) and many others, the Baltimore-based Kolodner has had the great pleasure of performing in the last ten years with his son Brad along with Alex Lacquement and Rachel Eddy as The Ken and Brad Kolodner Quartet. Father & son recently released their 4th CD Stony Run which charted on The Bluegrass and Folk Charts in March 2020. In 2018, Ken’s composition (“The Swift House”) was named Best Original of The Appalachian String Band Festival (“Clifftop”). The following year in 2019, the full quartet placed first out of nearly 40 bands from around the U.S. at The Neo-Traditional Band Contest at Clifftop. In addition to teaching privately for 35 years (typically 50-60 students), Ken has taught hammered dulcimer and fiddle at countless week-long music camps and hundreds of festivals. Among Ken’s many other credits include an Emmy nomination, over twenty recordings (with sales over 150,000), an “Indie” winner, a #1 World Music title, and many books on Appalachian fiddling and the hammered dulcimer. Along with his son, Ken is an active community builder. Now in its 16th year, Ken founded The Sandbridge Hammered Dulcimer Retreat, a series of six weeks of classes for 125 players from the U.S. and beyond. Kolodner is a tireless jammer and with his son runs the hugely popular bi-weekly Baltimore Old-time Jam which attracts between 50 & 75 players, making it the largest regular old-time jam on the East Coast. In addition to running other jams in the area, Ken & Brad founded The Baltimore Old-time Music Festival. Kolodner organizes various concerts in the area including Helicon’s Winter Solstice Concerts which attracts over 2,000 people annually. Ken has shared the stage with Doc Watson, Alison Krauss, Jay Ungar, Jeannie Ritchie, John McCutcheon, The Paul Winter Consort and countless others.