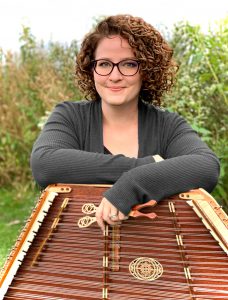 2013 National Hammered Dulcimer Champion, Katie Moritz is a musician and teacher hailing from the Chicagoland area in Northern Illinois. She’s been playing music ever since she could remember, starting piano as a very small child and playing the tuba through school.  Her taste in music is geared towards more eclectic sounds and it wasn’t till she started playing the hammered dulcimer that she found her authentic musical “voice”.  The unique instrument was able to seamlessly sew together Katie’s love of traditional music from around the world, 1940’s jazz standards, Broadway musicals, bluegrass, and pop.

While studying under an Illinois hammered dulcimer master, Bill Robinson, Katie has been awarded 7 consecutive folk arts apprenticeship grants with the Illinois Arts Council (partially funded by the National Endowment for the Arts.)   She has spent over a decade studying traditional music and is dedicated to teaching and continuing a traditional style of playing.  At the same time, she has also spent most of her life learning and playing music in scholarly settings, which has influenced her dulcimer playing to encompass an uncommon blend of old and new.  This edge has led her to receive various recognitions including placing 1st in the Mid-East and Southern regional contests, and the National Hammered Dulcimer Championship.

Katie holds a Master’s degree in Design & Media and an Associate’s degree in Music Performance.  She has taught and performed at festivals and gatherings around the country. Along with the hammered dulcimer, Katie is a multi-instrumentalist who plays mountain dulcimer, ukulele, steel pan, guitar, and more.